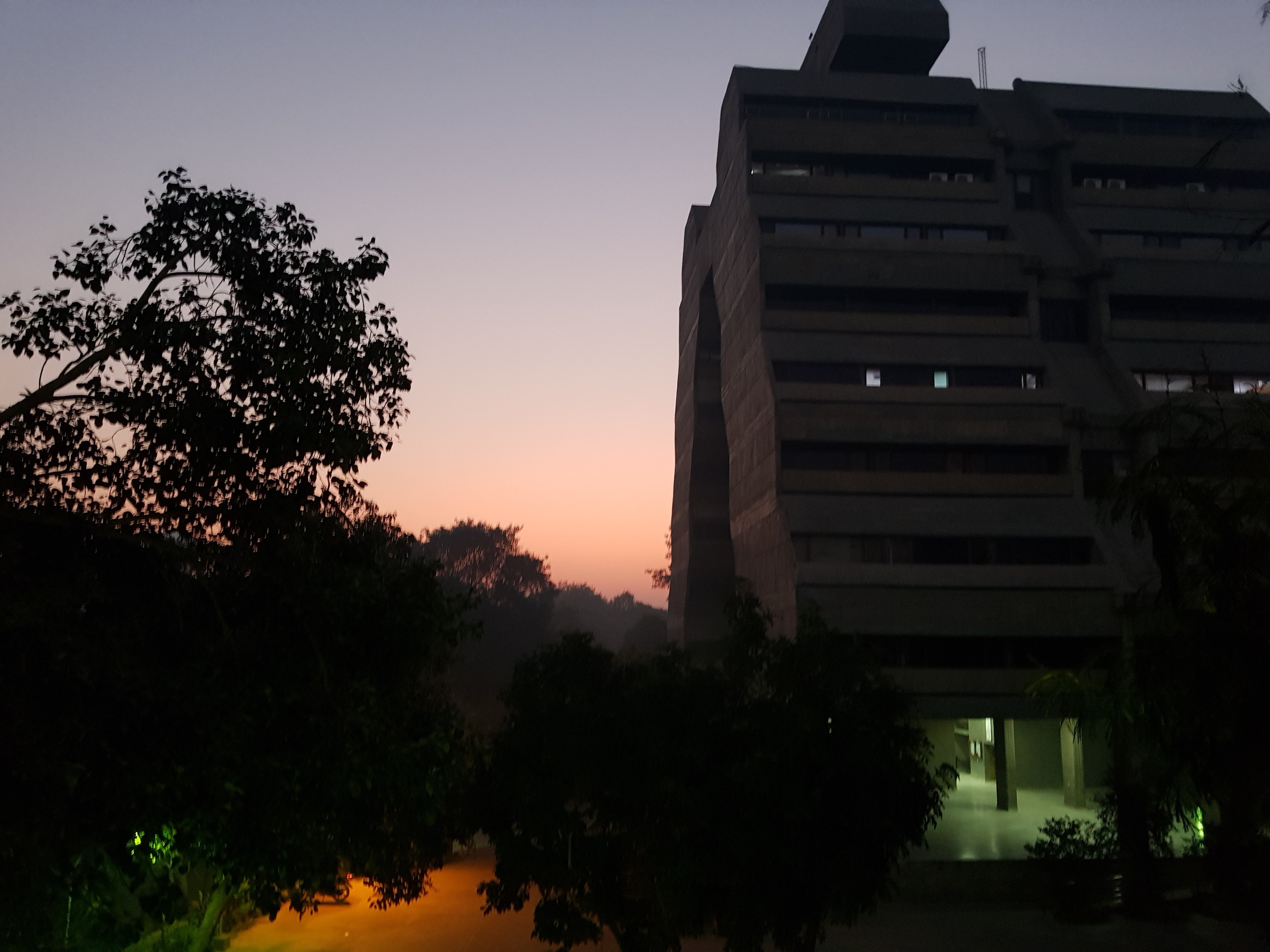 Before we flew to Delhi, our homestay had told us the best way to get to their place was to go to the registered taxi stand at the airport. You go to the kiosk, say your destination and get a little slip of carbon copy receipt which you give to any of the drivers of the black and yellow cabs. They are not easy to find, despite being right in front of the arrivals door, because

This was our immediate encounter with India at five in the morning. Who are you supposed to trust?

I’m familiar with being hassled by guys trying to sell me stuff and having to wave them away. I’m familiar with the predatory behaviour of cab drivers telling me, for instance, that the bus is cancelled for the day, but not for a country where I’m not even sure what’s a cab and what’s just some dude’s car.

As I quickly learned, in India, it is always just some dude’s car.

Eventually we picked a guy – we were walking away from him trying to find the taxis, and he made noises like “no wait you have fundamentally misunderstood” rather than “no wait I really want to sell you things”. A little dude in a turban – one of only two registered taxi drivers awake at that hour, despite an entire lane of parked “black and yellow” cabs in line — asked for the receipt (I was told not to give him the receipt by the taxi stand attendant until we’d arrived at our destination, but whaddayagonnado.)

I’ve heard crazy stories throughout my travel life about India – people getting taken to random hotels or guesthouses, being told their hotel is closed or doesn’t exist. I’ve heard about dupes buying entire tour packages only to realize the entire sales pitch and office was a scam. I’ve heard about the crazy poverty and the robberings and I have to admit, I’m on my guard. It’s really difficult when you’ve just got to a new country, you’re jetlagged and exhausted, you don’t understand the language, what’s normal, what’s friendly, what’s not. It’s also difficult when your literal first experience of a country is “we don’t actually trust our taxi drivers enough to drive foreign tourists to the places they say they want to go, so we have this confusing system where you pre-pay, and then the drivers to come back and give the taxi stand the carbon copy receipt and that, like, pretty much guarantees the driver can’t decide to take you somewhere else”. What?

Too late! We were off to the neighbourhood of Hauz Khas. That was the address. That’s it! Hauz Khas, A-34. In a nighttime smoggy city of god knows how many millions of people, we had two monosyllables and a number. But ???? turned out not to be a problem. Hauz Khas is a self-contained gated community In South Delhi, outside of the bonkersness of the central bazaar. (I was advised by several travel blogs to avoid staying in the central city if I wanted to like Delhi, which I thought was pretty sensible advice.) It was 400 rupees ($4) for the half-hour drive, and when he straight up asked for a tip, I tipped him 500 rupees, because I had no smaller bills.

Our homestay had forgotten that we were arriving, and there was a slow-motion sleepy kerfluffle as each member of the family tried to locate our reservation. After they found it we passed out for a few hours and awoke to plod downstairs for breakfast – a curried buttery rice and peas with fresh roti, and then the whitest of white breads toasted and served with butter pats, like at a Best Western continental breakfast. One of the family living there gave us recommendations for a first gentle jet-lagged day in Delhi: go check out Connaught Place, the Indian crafts bazaar, and then go to a restaurant in Hauz Khas village for dinner. Sounds good to me.

We got our first daytime look at the neighbourhood, too. The houses were detached, had short walls and gates, vegetable sellers pushed their carts hawking wares in the street. Everyone had at least 100 potted plants out in their gardens — dumb cane, banana, philodendrons. Way more chilled out and personal-space-y than I had been led to believe.

Connaught Place was a city center, of sorts. It’s a series of interlocking ring streets, and it reminded me a bit of Taksim — a commercial and cultural hub where two kinds of people go — tourists, and young locals who want to look cool. Oh, and the people who prey on both. It was hard to pay attention to because a guy would approach us – me, actually, never Harriet – every time we stopped for literally two seconds to take something in or turned onto a new block. We had this conversation about six times:

“Don’t go to the next block, it’s closed for lunch break/not patrolled by police/guarded by winged snakes”

“Welcome to India” (pretends to end conversation with a  head bobble)

“Where are you from?”

“(Pitch about going to official government of India tourism office)”

The first time I was just so genuinely spun. If it was a tout, he was the slickest tout I ever met. But then we had *the exact same conversation* a few more times, and the pattern became clear. They do everything to make you believe that they are just a regular helpful person who wants to chat, which is unfortunate, because it makes you suspicious of regular helpful people who just want to chat. They’d sense I was trying to detach myself and spin a line like “I’m going this other way, I’m not following you, we’ll part ways at the end of this block” . They’ve evolved more sophisticated trust-building mechanisms to trip up even the experienced traveller. Or, they really are just friendly, and also really want to help their friends make some money. Without any context, I just have no way of interpreting anything.

The rest of the day was a slur of metro rides and walks around curious bazaars. We saw our first monkey and a lot of decorated vehicles. Dinner was in “Hauz Khas Village”, a outdoor mallish area about a half-hour walk from the actual neighborhood of Hauz Khas. I thought I was prepared for general developing-country-traffic-madness. In Istanbul, if you walk out in front of someone, they stop for you. In Delhi, they keep moving at the same speed, but change direction. In Istanbul, everyone is trying to overtake at all times, which makes assholish behavior the norm, and therefore predictable. In Delhi, There are no obvious traffic rules, or even lanes, whether for those who walk or drive – everyone and everything justs drifts back and forth on the road from moment to moment, like a fluid, going where they feel called. Oddly it made me long for the comforting sort of Turkish chaos. The rhythm here made me feel completely out of synch.

It got dark fairly early (it is still winter, to be fair) and apart from the headlights illuminating the thick brown smog as they zipped by, there was little ambient light. South Delhi had plenty of wide mad boulevards full of bicycle, tuktuk, and regular traffic. We passed a group of street people who’d strung up their supplies from a tree in a traffic circle, and had set up a trash fire by the side of the road to boil the kettle. We passed a collapsed concrete shack that served as an active city garbage dump, and on the side of it was a portrait of Gandhi and a quote: “Sanitation is more important than political freedom.” It reeked of piss.

As we walked, tuktuk drivers would slow and approach us when they noticed our foreignness, and offered a ride. “You want to walk?!” they’d say when we tried to wave them off, and they sped off, laughing. I kind of get it now.

Approaching Hauz Khas village it got much more crowded along the sidewalks, which were paved and unpaved alternating with every stone, and cars and tuktuks all mashed together. One dude swaddled in random rags was operating a barrier arm across the road to enter — yet another gated community thing — and the barrier arm itself was weighted down with rocks. He literally just pulled on the rope to hold the barrier down, and let up on it after a car had paid him the appropriate fee (bribe? Was that actually a job, or just a guy who’d set up a barrier? who knows).

Anyways. The restaurant our homestay had recommended was wonderful. We ordered much too much food and had no idea what anything was. In the middle of our meal, the head waiter started ringing a bell by the door and waving some incense in front of a gold statue. It delights me that many years of living abroad I can still be utterly lost. 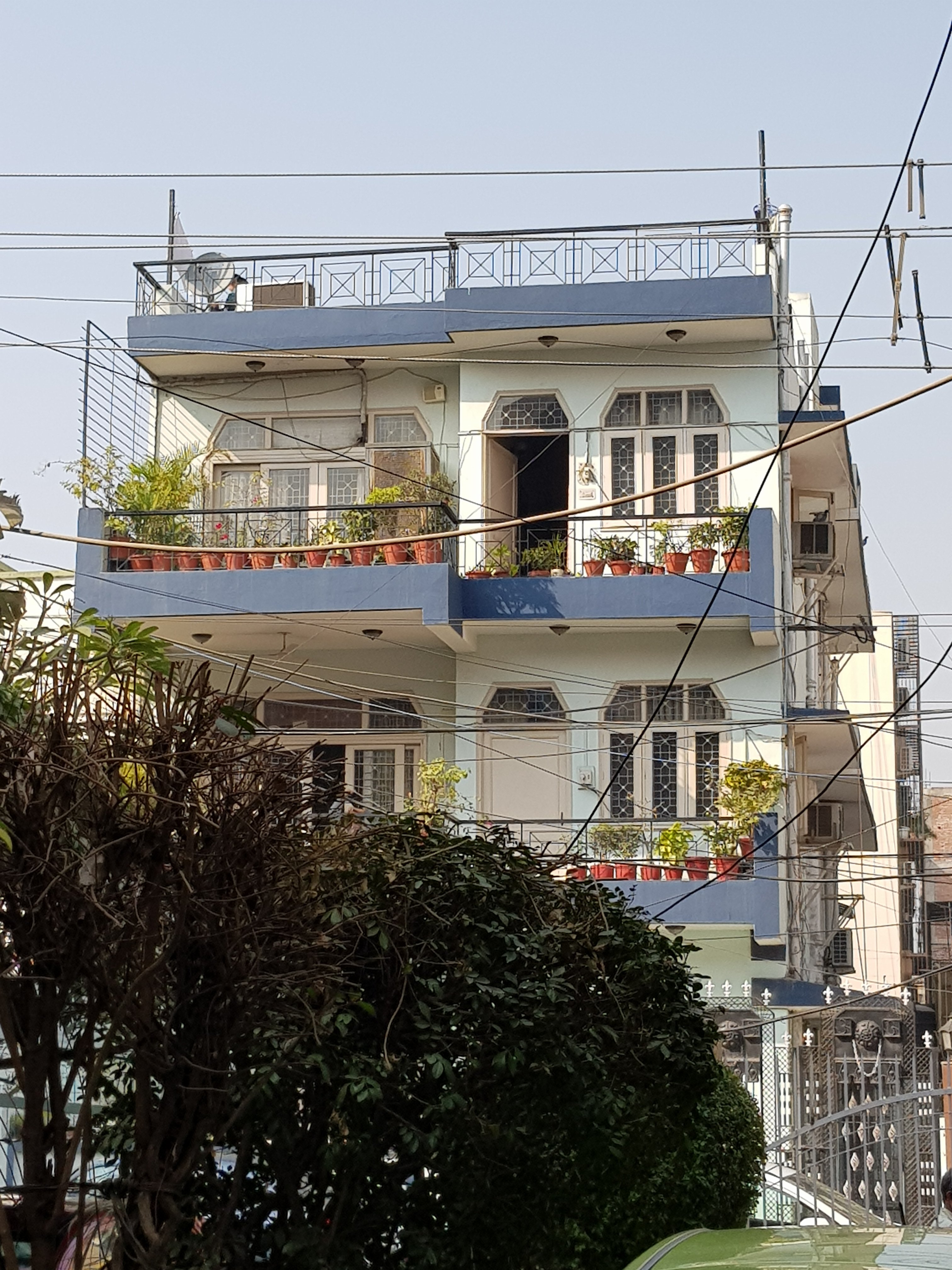 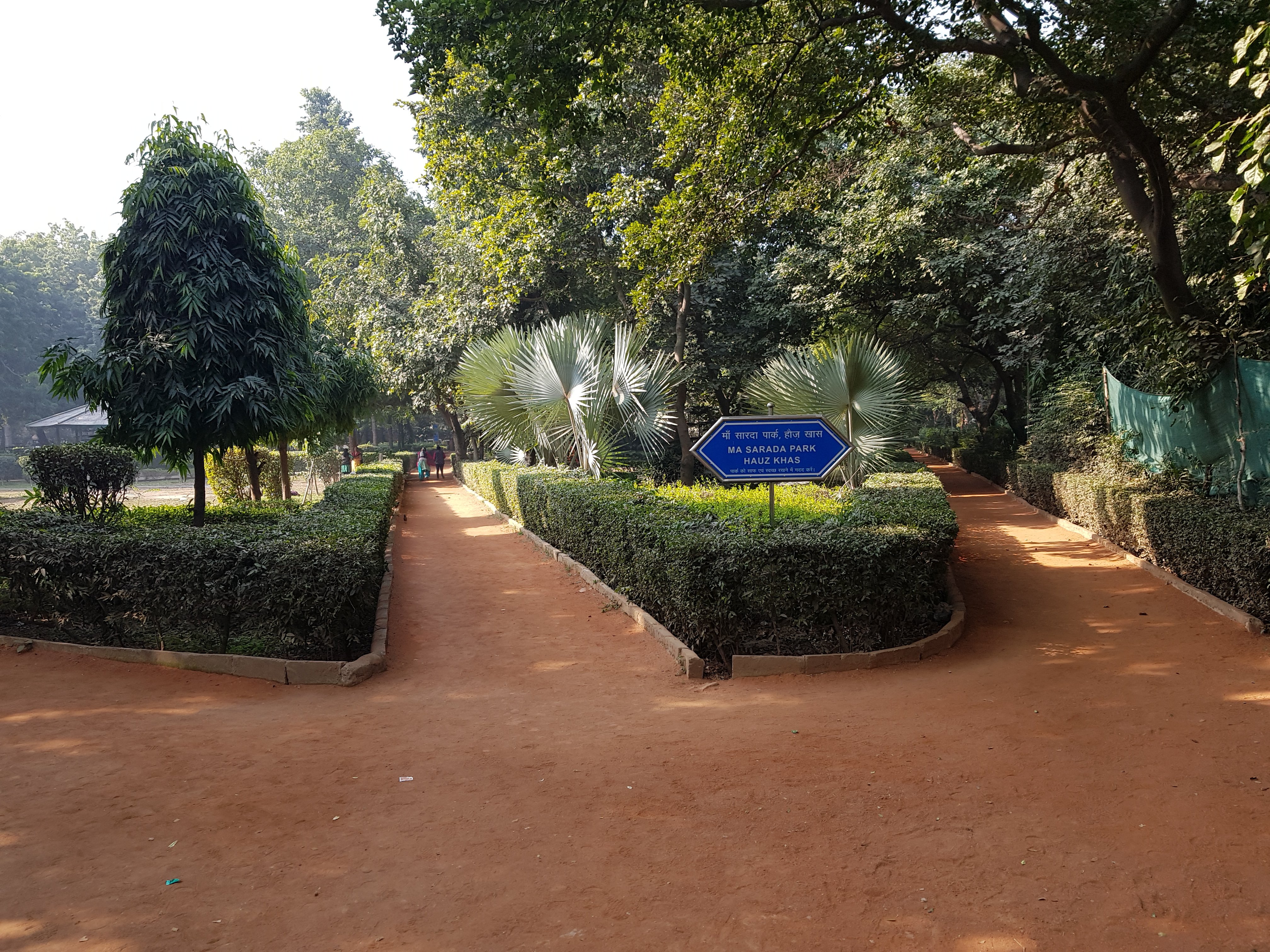 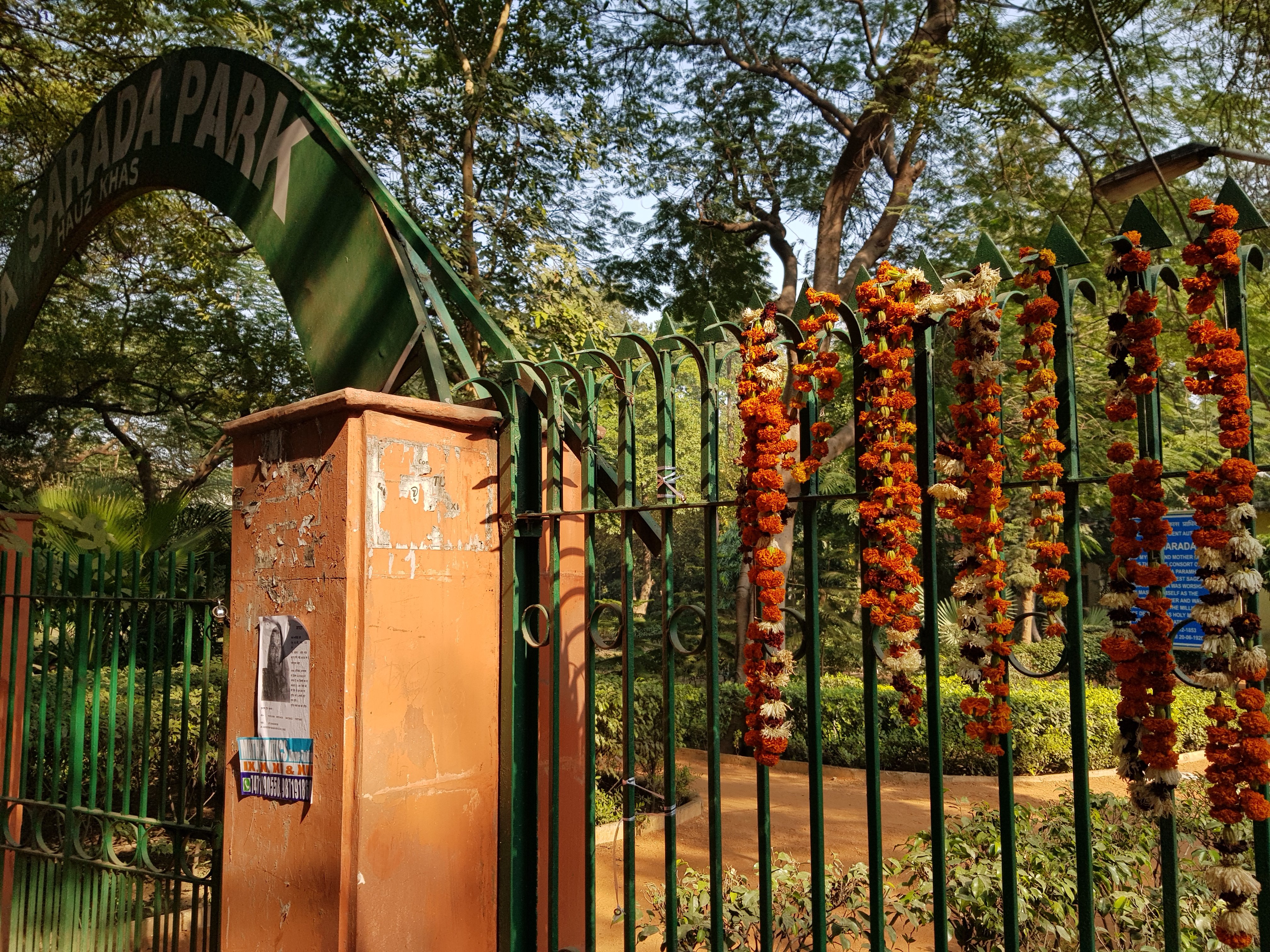 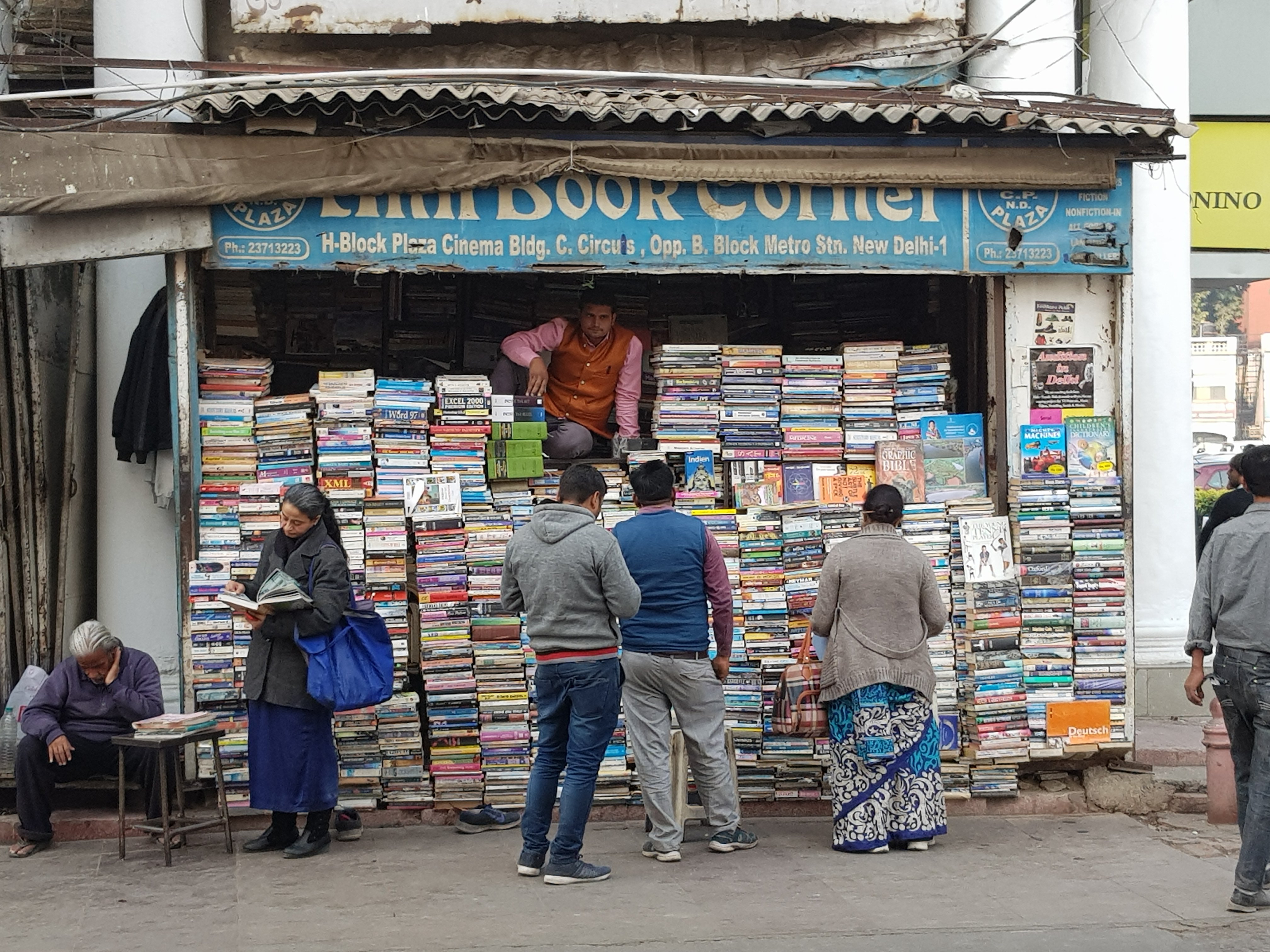 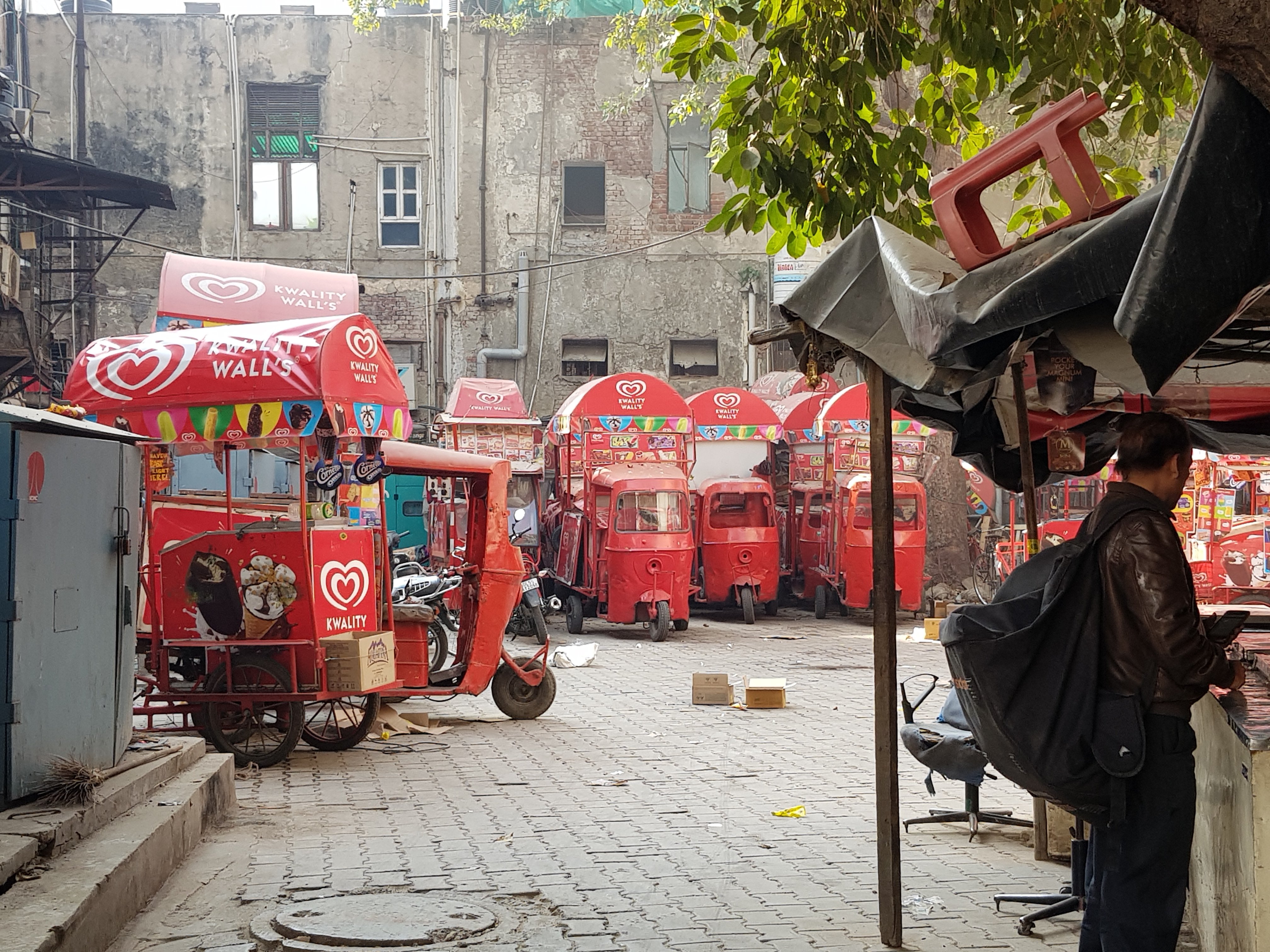 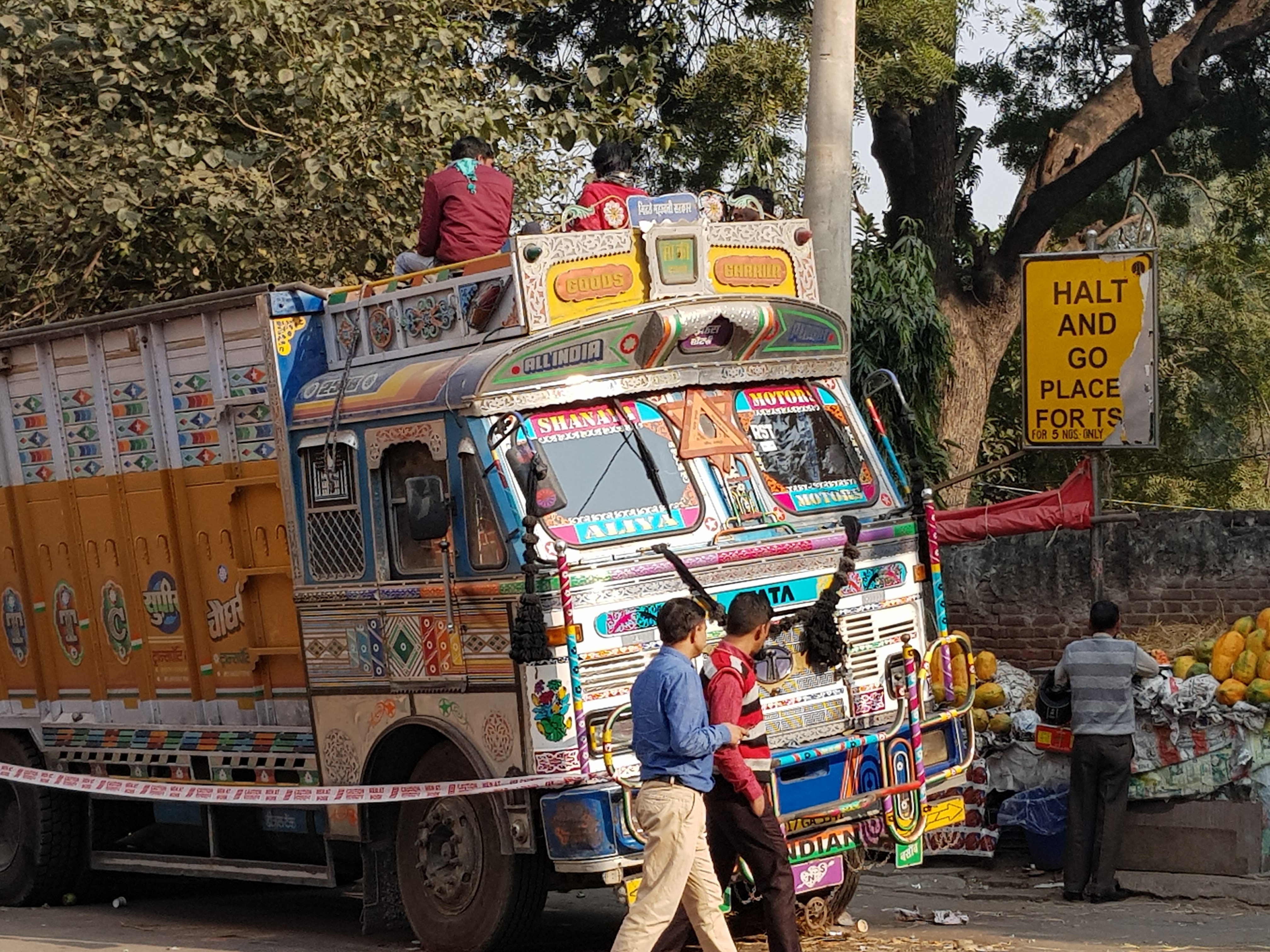 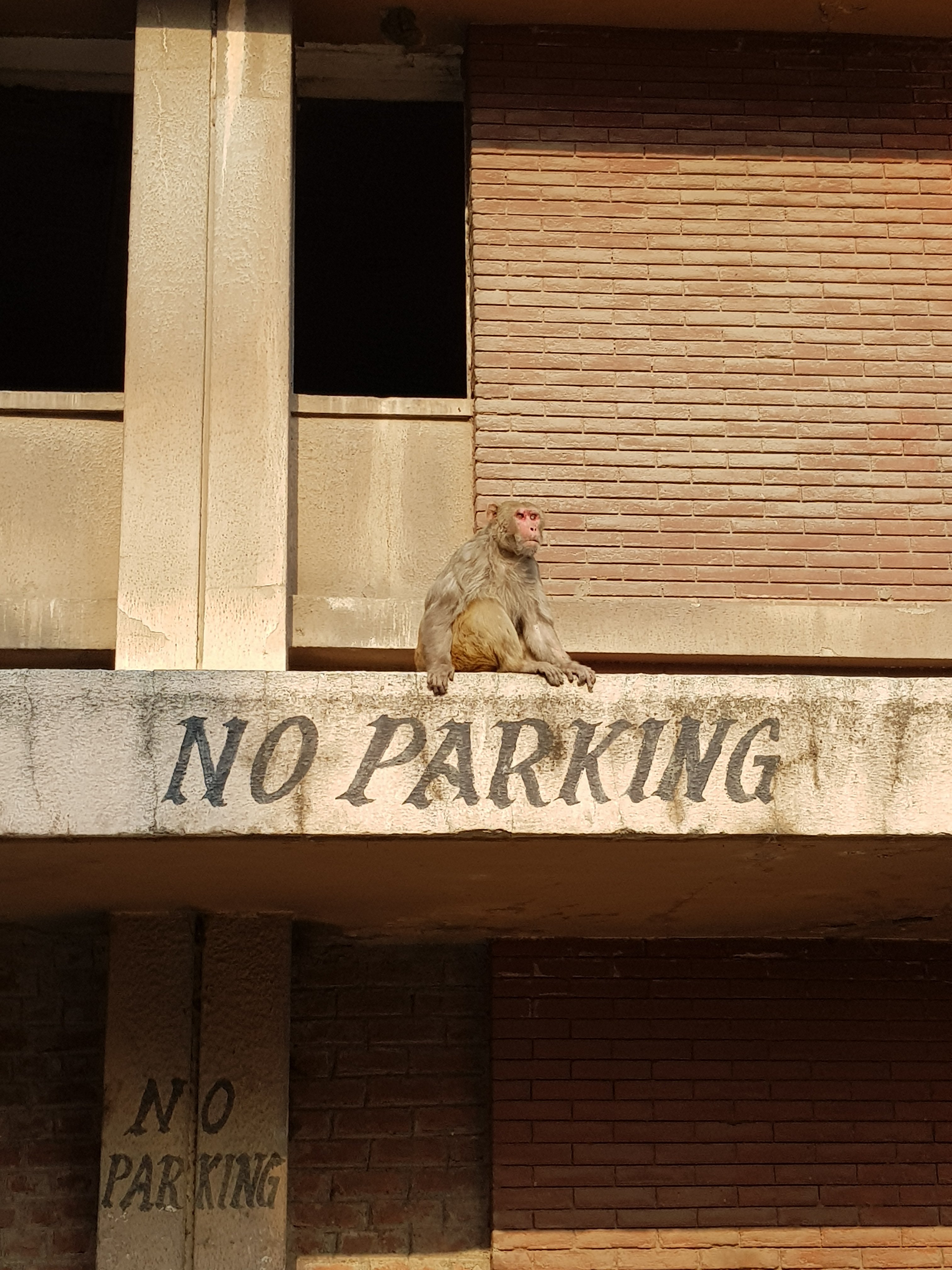 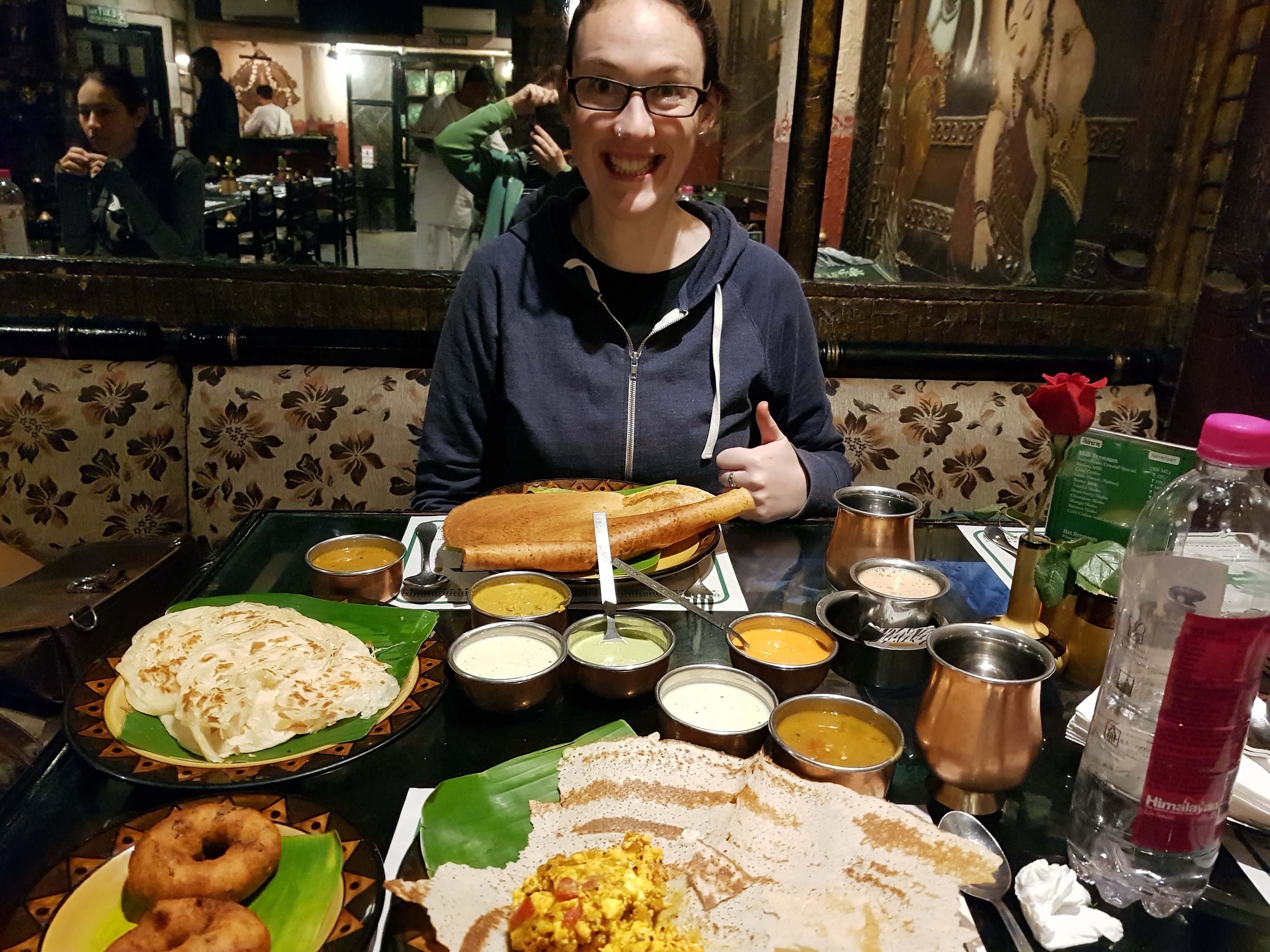 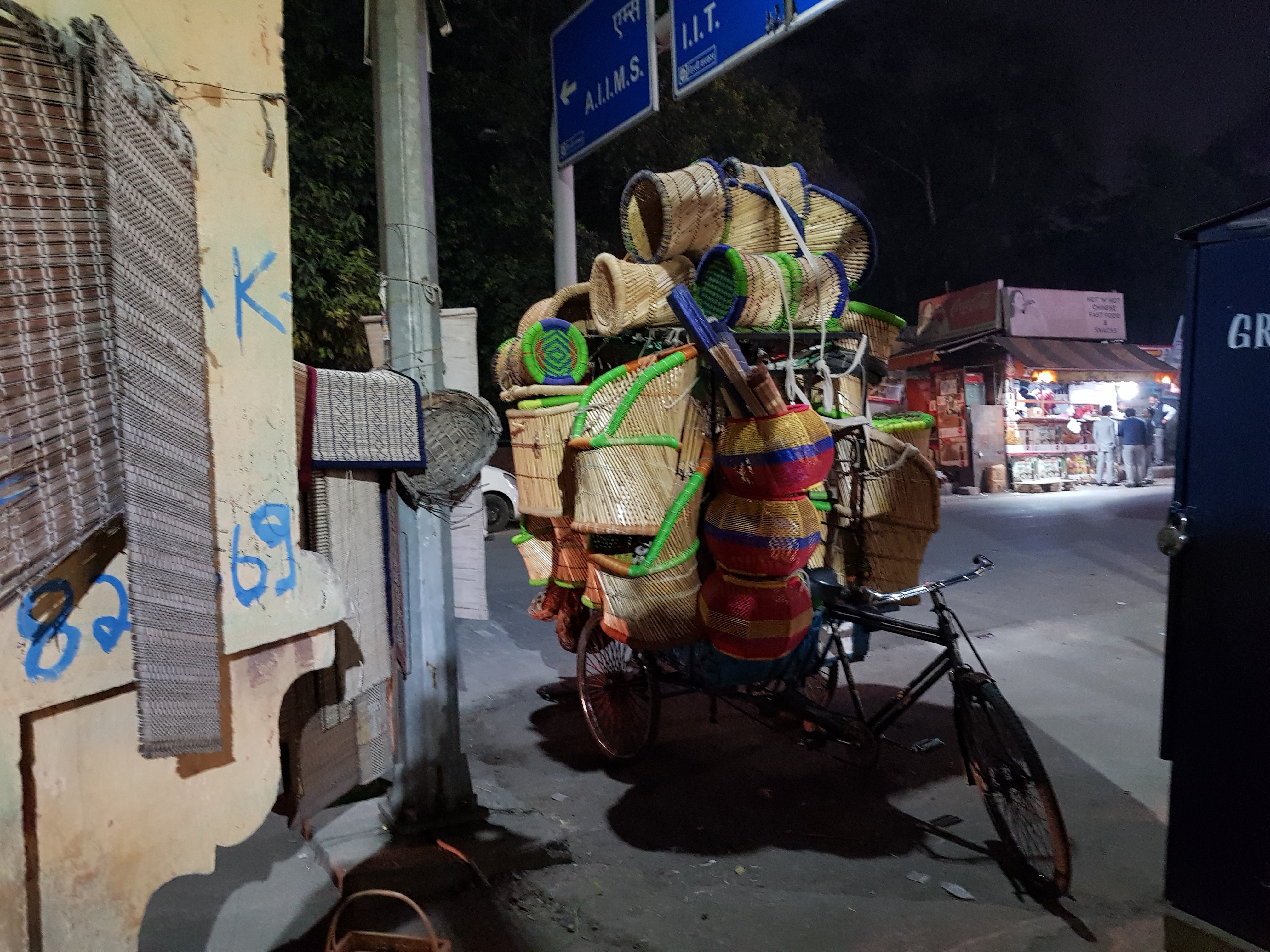