As  I mentioned a few posts ago, our neighbor Gary is a petty criminal. He deals drugs. We know this because 1) a bunch of completely different people all drive up to his house at all hours of the day, stay idling in their car for five minutes, and then leave, and 2) his house always smells like drugs. This is funny for me, because our neighborhood looks exactly like a charming English suburb of charming brick houses and charming little gardens. It does not look like a place where a small-time drug dealer can just, like, openly deal drugs.  But then again, London is extremely lax when it comes to enforcing cannabis prohibition — often you’ll pass two people smoking a joint on the block, and this is true for anywhere in the city, and nobody will say anything to them, nor will they bother to conceal it.

So anyway, back to Gary. He lives with his Mom. I’ve talked to him a few times when he pops out the front door for an energy drink and a smoke break. He and his friend are day labourers and don’t always have work, so on their off days they hang around at home and play videogames. They are bloke-y and quite convivial to neighbors, generally.

A few months ago, I was at home with Caera and Ellie (and Mavis the Cat) when Ellie said, “There’s some guy in the neighbor’s back garden wearing a bandanna on his face.” Before I could really ask what she meant, at that point the front door boomed (our houses share a wall, so we felt their door being broken open) and I looked outside my window and saw this rather frightening scene: 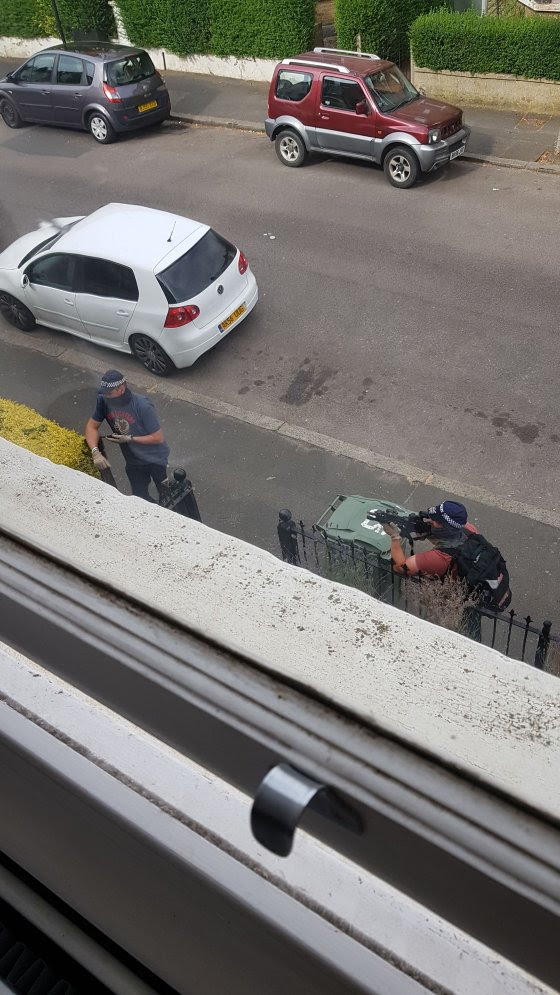 I thought for a brief and terrifying moment that we were about to get home invaded, but it turns out that these plainclothes officers had gone undercover to do a home raid next door. We were all alarmed, but confused: they’re just dealing drugs? What’s the need for giant guns?

The cops bundled Gary, his friend, and Susan out the door. (Susan walks with crutches, so she just hobbled out in her own time.) They then all got handcuffed (except Susan) and stood around at the end of the street while the cops searched the house. They brought in the tiniest sniffer dog I’ve ever seen in my life to root around in the house.

Nina came in about ten minutes later. “They’d blocked off the whole street to do their little operation,” she said. “Let’s have a good gossip.” All four of us sat in the living room having an afternoon beer and peering through the curtains. We were all puzzled: what was all the fuss about?

“I reckon they were all just bored at the undercover unit,” Caera theorized. Susan was lighting the boys’ cigarettes, and they all seemed to be having a jolly good time, despite being detained. They quarantined Susan from the boys after that.

I was just heading out the door, so I waved at Gary as he was standing on the sidewalk. “All right?” I asked.

“Sure,” he said with a smile. The cigarette fell out of his lips. He frowned, and bent at the waist to retrieve it with his lips, like a deer nibbling foliage. “I was just playing playstation up there when the cops come up on my CCTV and I thought, oh bugger, I’d better leg it. So I go out the back and they’ve already got their man there.”

“Ah,” I said, deciding not to point out that it is not something most people get, CCTV of their front door. “Good luck.”

“Happens every week. Welcome to south london!” he said cheerfully.

We later learned that the cops had searched the house for four hours, found nothing, and left the house in disarray. Apparently they’d had a tip about them stashing weapons somewhere, which is why the London SWAT team had materialized. In general, the neighbors on either side thought the whole raid unecessary, and thought the police should have left our small-time friendly neighborhood drug dealers to their peacable selves.