I live in an Edwardian (maybe?) brick townhouse constructed sometime around WWI (When was Edward the king?). Next door in number 50 (it’s a duplex) are Gary, the petty South London criminal, his mother Sharon (maybe? To be honest have forgotten) and his friend Edward (not a king). To our left in 54 are Wanda the Brazilian communications PhD candidate, her husband Charles the lawyer, and their children Sophia the Compulsively Practicing Pianist, and Henry the Really Loud Yeller.

We are in 52, Selsdon Road, just up from the village of West Norwood, which boasts one of the finest historic cemetaries in all of London. Here are the residents of our home:

“Nina’s good at murdering. And disposal of the bodies.” – Caera

Nina grew up very Catholic in a place called Stoke-on-Trent, where people talk incomprehensibly and very fast, and call each other ‘duck’. Nina talks fairly normally now, does not go to church, and does not call anyone duck. Quack.

Nina’s a mental health nurse in an adolescent ward and spends her time shepherding around depressed teens all day. This had given her a very practical outlook on life and a deep appreciation for creature comforts. If she ever were to wallow in her own misery, it would be properly indulgent wallowing: get a bottle of moody wine, put on sad movies, wear footie pajamas, eat takeout and cake — and then move the hell on. Nina’s very certain of herself and enjoys the opportunity to let you in on the secrets to life.

Sometimes, she is called upon to prove it. For her friend Mary’s wedding, she and another friend had been asked to bake a round of cupcakes. She decided that not only would she upstage friend B with some gourmet offerings, she would make three kinds of cakey delights. She spent several months perfecting and testing her recipes (we got to try a few batches — strawberries and cream cakes, mojito cupcakes, champagne cupcakes). She then bought a cupcake ferris wheel to display them.

Unique among English people I have met, Nina says exactly what she means. What you see is what you get.

Caera is what would happen if you took a high-intensity doolailey grandma, distilled her into the smallest most concentrated form, and de-aged her to give her superhuman energy. Caera is absolutely bats.

Nina and Ceara have many superficial similarities on paper, but have very different approaches to life. Both are mental health nurses. Both are vegetarians. Both enjoy strange English things that are incomprehensible to me. The similarities end there.

Caera is a bit of a people pleaser and a great listener, and has a tendancy to just let her mind wander wherever it wanders as you’re speaking together. She is never quite sure whether her whimsy is her own or someone else’s that she accidentally picked up, like some communicable virus. She spends so much time accidentally doing things she didn’t really intend to do, storing that energy in subconscious batteries, and then releasing it in a frightening productive fury upon: the garden, the kitchen, odd domestic projects. She’ll suggest an idea that makes absolutely no sense, know that it makes no sense, defend it, deny she ever defended it, and then implement it, all within the same sentence.

Her and Nina form a formidable team. They drunk one night and ordered a life-size cardboard cutout of Prince Harry and Meghan Markle off ebay. They have planned a dead celebrities themed Halloween party. They do cross stitching and watch movies together in the living room, gossiping. They’re basically a two-woman sitcom.

When I first met Ellie, I dismissed her out of hand. She was strange and quiet and didn’t really make eye contact. I usually have a pretty good sense for people, so I figured we just wouldn’t really get along. I could not have been more wrong. She is by far one of the most interesting people I’ve ever met.

Ellie has carved out a life for herself way, way in the margins of society. She is a part-time cat-sitter, giving food and insulin to the diabetic felines of the wealthy. She scrounges off welfare benefits and dumpster dives for food. She bikes everywhere. She is also a vegetarian, but for strict ethical reasons. Actually, everything she does is for strict ethical or ecological reasons. She ferments her own saurkraut and bakes her own sourdough bread. Her cabinets in the kitchen smell potently of yeasts. She runs a variety of community arts groups – a queer improv theatre troupe, a “laughter yoga” class, an effective altruism ethical meetup group, a standup comedy clinic.

You would guess absolutely none of this because the overall impression is “mess”. She wears the same clothes everyday and her room looks like a warren. But she just does not give a single solitary fuck about anything that people in a society are supposed to do. I have a lot of respect for that kind of commitment. We have a lot of good talks about the merits of puns and ethical philosophy. Ellie isn’t at the house much, as she’s usually out catsitting, but you can always tell when she’s in because there’s cabbage strewn all over the kitchen and a podcast blaring.

Mavis is a cat. She was a stray when Caera adopted her a year and a half ago, and she acted very skittish towards people for a long time. Picked a lot of catfights with the big grey cat nextdoor. Now she just stalks me around the house because she’s realized I will feed her if Caera’s coming home late. 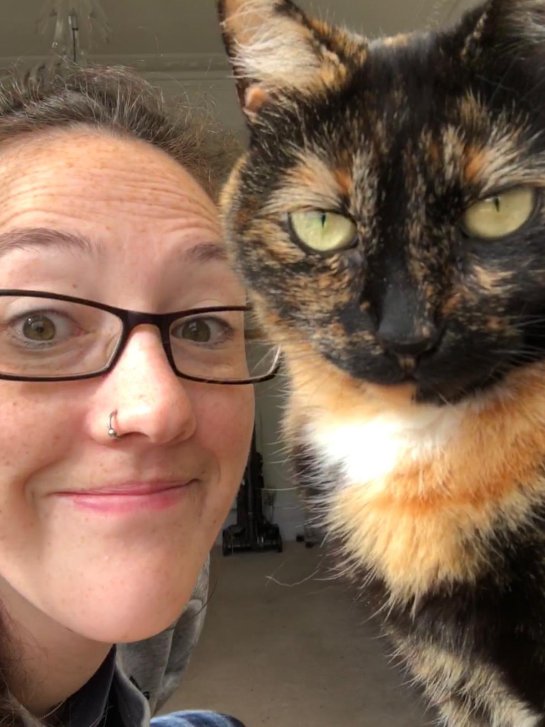