Often while commuting from place to place in this tumultuous mess of a city I’m forced to screen the whole thing out for sanity. Even popping in headphones doesn’t fully kill the noise. BUT, I had some time today and took the scenic route. There’s no “look” to the monster. My flat (Orkun’s flat) is in General Hasan, and it is between a ritzy boulevard of banks and covered garden restaurants. Just down the slope past our building is an open rotting pit with a collapsed rusty factory, slowly and agonizingly being converted into a parking lot. The corrugated steel around the site has been there ever since I moved to Istanbul in 2013. So you walk from Bitter Almond Avenue (the ritzy one) through the seedier General Hasan (my sketchy hood near the pit) and across the river into the ramshackle, filthy, desperately poor Idea Hill, where I get the bus. Idea Hill is a discombobulation of dirt mounds and car shops next to an open gutter canal, full of sewage, also in agonizing slow reconstruction. It smells curiously of burning plastic. On the road to the bus stop, I found a fenced-off garden hemmed in by the highway and my side street. I saw Atatürk’s face on a man-sized flag hanging from a dead winter branch. I saw maybe 20 ragged damp Turkish flags strung up in this fenced-off garden. It was perhaps a homeless camp, or a shrine. It had furniture, a tent, a mirror nailed to a tree underneath a portrait (again, of Atatürk) also nailed to a tree. The sidewalk was no one material, a composite of brick, cobblestone, open earth, cement.

So I cross the bosphorus on the bridge. It’s spectacular. You know this. The sprawl and linger of the grey clouds drifting above the overgrown peninsulas of the city, the churning dark boil of the water below.

At Well-And-Chain I popped out of the bus and decided to walk to rehearsal in Etiler. Well-And-Chain is a wealthy banking district with tall skyscrapers. The one right next to the metro is Tat Towers, a completely unnocupied piece of prime real estate. It was purchased and constructed by a Turkish mafia don who got caught with bad building permits, and so it exists in legal limbo, unable to be rented or sold or destroyed. It is called Tat Towers because the building’s shape is literally two towers separated by a smaller structure. TaT.

And while walking through the flashy European neighborhood of Etiler, I found a delightful park in the middle of the avenue. There was an ugly cubist ogre sculpture leering at the passing traffic. Then, for Valentine’s day, the municipality had strung up hearts all around from the branches. But also, because the municipality is lazy, their Christmas decorations were still up.

And then, a man walked by pushing a shopping cart full of electrical cords. It is his job to hook up the lights. His name is Murat. 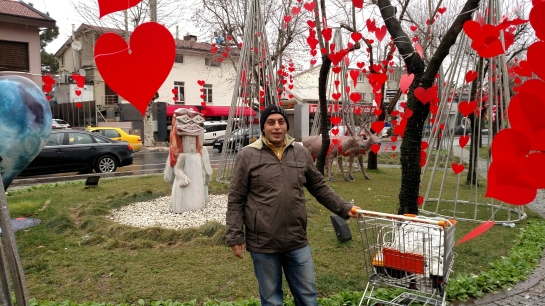