A hostel owner in Himare gave us a puppy. He had four of them. Not like "he gave birth to four of them." Then he’d be some sort of horrible man-dog and instead of a puppy, I would have a horrible monster. He just had some extra puppies. From his dog. The puppy is a normal puppy.

There were a few days in Tirana, the capital, where we stressed out what to do with it. Though it had been a riot taking him around Albania, we couldn’t to abandon the pup to the street. Our German hostel owner was intent on proving that we Americans were stupid, and that the only possibility was either getting a "pet passport," which would take months; or getting a local animal shelter to adopt it, which is difficult because as we discovered, the only animal shelter in Albania doesn’t actually have a building. We met some other Americans who were like, "Just smuggle it in! Put it in a kangaroo pouch!" So we wrapped puppy in a towel and smuggled him into Macedonia. There, we met a motor-mouthed New ​Yorker who’d spent his childhood in Skopje, and took us to the vet, where we acquired such a pet passport in ten minutes for 5 euro. The vet’s office was a one-room office which, apart from a single shelf of medicine, was full of dog food. The vet looked like Mr. Rogers.

We are now in Kosovo, and today, we hung out with old Serbian men who sang songs of their people and drank rakija and one of them was an artist, so he had anna pose for a portrait. We have a sketch now from this afternoon. Good day.
​ 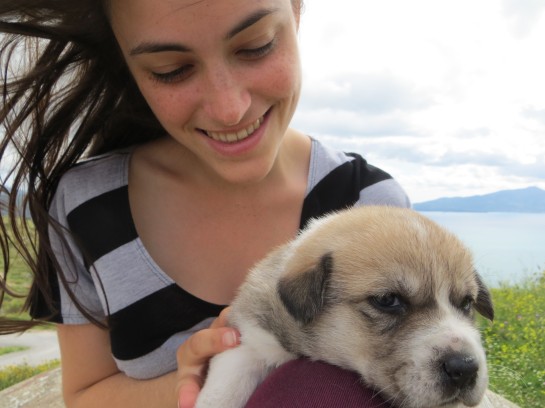 The puppy is named after Skanderbeg, the hero of the Albanian people.