Let’s get the whole city part out of the way. I’m in Tbilisi. What? Our hotel is on the outskirts in between a mountain and the river Mtkvari.

That is pronounced exactly as it looks. There are no secrets to georgian. It literally is the sound M-t-k-vari but strung together fast as one series of soft clicks, as bats do.  “Muh-tuh-kuh-vari.” If you weren’t paying attention, which I definitely wasn’t, you just hear “click-vari.” RETURN TO TEXT.

When you look out my window at hotel Bazaleti, you see first the ground level, and then above that (if you’re on tippytoes) some barbed wide stretched around a terra-cotta roofed restaurant. If you go to the ballroom, where we eat breakfast with the Azeri, Russian, and UK diplomats, you get a view of the city: three hills cleft by a the river, all in the muted tones of winter. VERY Alaskan spring. It’s a little surprising how much of the city feels familiar.

I room with this guy Joe. He’s reading his kindle right now. He’s totally from U-TAH. (Actually Massachusetts, but he went to school at BYU. He claims UTAH. He’s written three scifi novels and wears a leather jacket. He softly grunts while reading, like the magical snoring of the wakeful. Or, a pigeon.)

Earlier a few of us (Anna, Joe, Christina, Stephen) went exploring Tbilisi. Most of us were still sleeping off the jet-lag, but we knew we had only a few hours to hit the city before our week of 12-hour-a-day training. ‘THIS COULD BE THE ONLY DAY WE SEE TBILISI IN THE DAY,” we said to ourselves, getting PSYCHED, “WE MUST GO NOW.” We tried to get instructions from the receptionist, and she wrote down the number of a marshrutka and then asked us to hold on. She ushered a guy out of the office and said, “follow him, he’ll show you the stop.” He sullenly lit a cigarette and walked outside. We followed to the curb out in front of the street.

“Inglisuri tsot’a?” I asked him, which I hoped meant “you speak english?” He did the comme-si-comme-ca motion. I had no idea which bus we took to get back. Through several poorly mimed moments, we got the price, the time, and a shrug.

The “Marshrutka,” a Russian word meaning something like “the short bus,” is what seems to be the primary form of  getting around for car-less Tbilisiites. It’s a 15-person van crammed full of people with a sign in the front reading “150” or “40” and a bunch of destinations in Georgian, and they’re SUPER cheap (think 30 cents), and basically you just yell stop when you see where you want to get off. Like a combination bus/taxi. Downside: I have no idea where they pick you up. RETURN TO TEXT

We apparently had missed our Marshrutka and our smoking buddy negotiated a cab for us to downtown, for xuti lari (three bucks). We got out and saw this immediately: 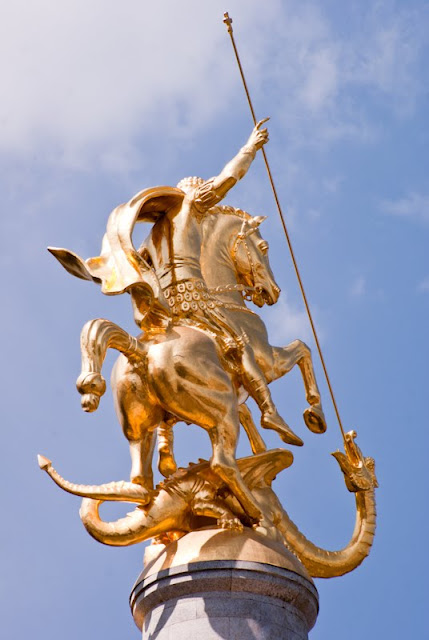 (these are stock photos. Sorry. Going to have to do camera surgery tomorrow.)

We wandered through the streets and saw a lot of old churches with pointy cone rooves. Most of the city is a complex blend between crumbling apartments and ultra modern set pieces like the freedom bridge:

We didn’t climb this monster first time out, because we had to get back for pre-orientation orientation. Uh. Later a larger group of us went out to scale the bride, which was much better at night. The whole thing slowly flickers, like a jellyfish swimming over a bank of flashlights.

And once you’re on the middle of the bridge, overlooking the Mtkvari, you’re rewarded with something truly awesome: 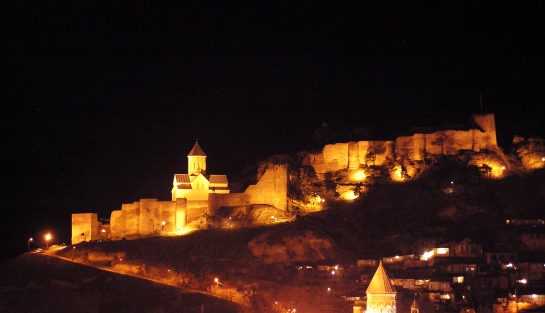